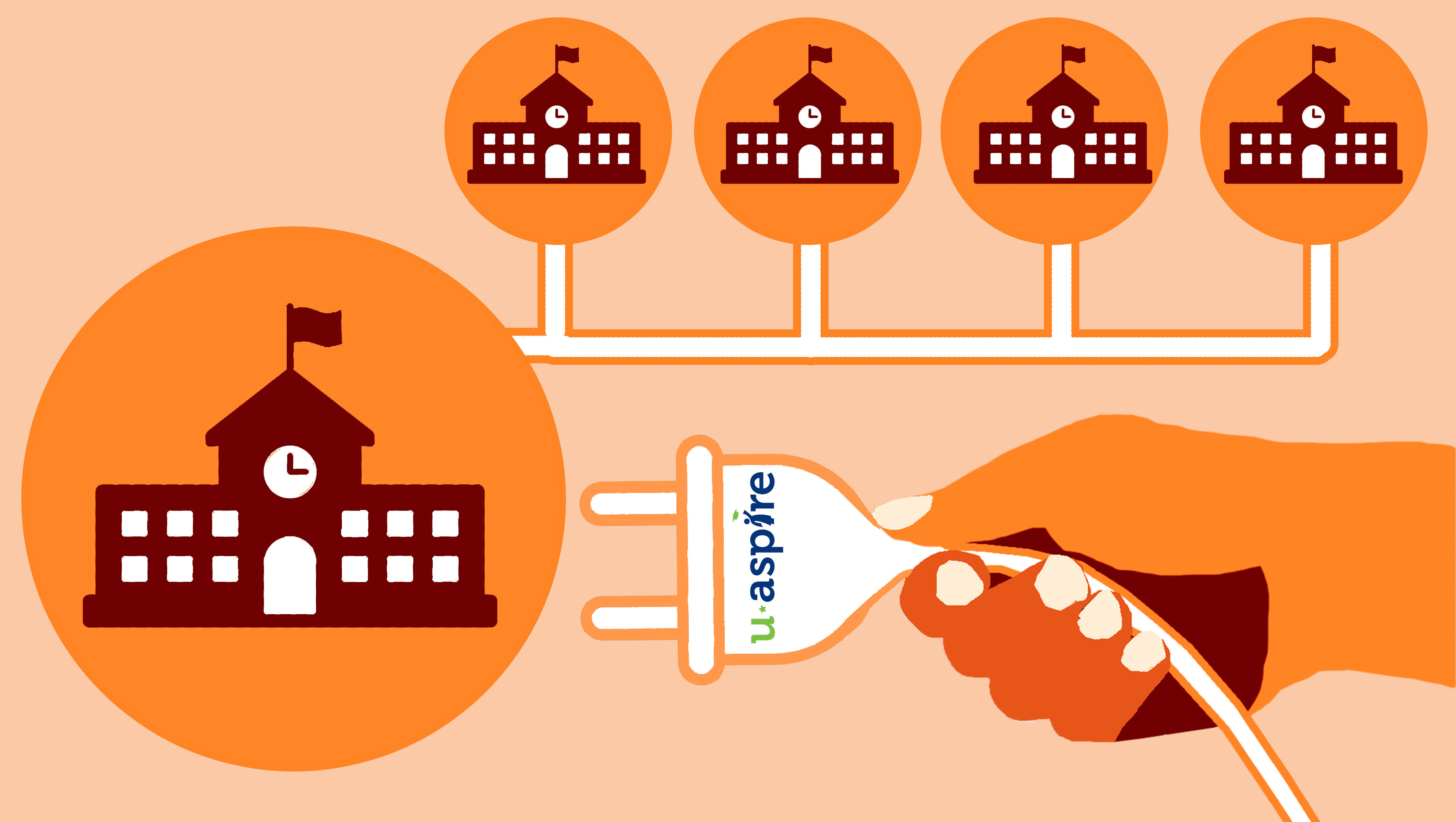 Working within the System: A Conversation about Challenges and Opportunities with Bob Giannino of uAspire

As the work of a nonprofit or government program shows more and more promise, and whatever specific thing that organization does to serve people measures up well, it’s often the case that the issue of scale is raised. How can the work be expanded? Can it serve even more people? Can it go from, say, the city it started in to other cities?

Tradition in our sector seems to keep most organizations on this track. In my experience, it is a rarity for organizations that are doing well executing on whatever specific mission they have to stop and take stock of whether what they’re doing is achieving the right outcomes that make the right kind of difference. In other words, at least not in a “big picture” sense beyond that specific mission, I don’t believe they often ask: To what end?

Recently, I sat down with Bob Giannino, the chief executive officer of uAspire (full disclosure: Bob also sits on the board of Root Cause). I wrote about the organization in a blog post a few weeks back. uAspire has a very focused mission: “ensuring that all young people have the financial information and resources necessary to find an affordable path to and through college.” But while we spent some time talking about that specific mission, we delved into the very themes and questions I’ve been writing about since launching this blog a little over a month ago.

Most notably, we discussed scale versus life outcomes, and we spent a good amount of time talking about the important differentiation between fulfilling the immediate need for financial guidance and helping people achieve one of the specific milestones along a pathway to lifelong success, that is, whatever post-secondary training or education is needed to secure a good-paying job.

Bob already had a long history working in the nonprofit sector before joining uAspire in 2005. Under his leadership, uAspire—which began in Boston—has expanded the scale of its work in a number of ways, with new efforts in other parts of the United States. Bob recounted what is a complex set of challenges that ultimately led to a decision to undertake scaling but choosing to achieve scale in a different way.

“What came up was this idea of spread,” he explained. “Nonprofits have long had a traditional scaling concept that involves replicating what they do in one place somewhere else, and then stamping it out in lots of other places. I’d done that at my previous organization, and I was pretty dissatisfied with it as the primary driver of making a difference in student’s lives.”

The spread idea was to train others to do what uAspire does so well and thus reach a greater number of students in a more effective and sustainable way.

In places where uAspire was working directly with students, Bob built up an evidence base of the efficacy of the work with respect to the outcomes uAspire aimed to achieve. “We had always taken our own staff members ‘off the street,’ with no specific knowledge about college affordability issues, and trained them to become really excellent financial aid counselors. We asked ourselves: If we’re already succeeding at that and getting them to serve students well, can we train other people who are already trusted advisors of students?” So the focus shifted to working with school systems to train guidance counselors and others based on the practices that emerged as best from that base of evidence.

“The trained people model is better,” he explained, “because it improves the efficacy of folks that are already at scale, such as guidance counselors at school districts across the country. We utilize the trusting relationships they already have and then work on their efficacy. Are they better or as good as our staff? No. Our staff does this all day, unlike any counselor in a school in, say, Houston can because they have multiple responsibilities. But these folks are definitely better than before our engagement with them, thanks to the support and coaching we’ve given them. So, given the millions who need support around college affordability, we believe it’s a better approach to reach more students and make a measurable difference.”

uAspire has since trained 10,000 people, and those external advisors served some 336,000 students in 2018 in addition to the nearly 10,000 the organization served directly.

Clearly, the training has allowed uAspire to reach a far greater number of students and has proven more sustainable because they are training existing people in the schools, rather than having to rely on direct fundraising to pay uAspire counselors on staff.

“They don’t have to work for us,” Bob said. But they do provide the assistance uAspire has been giving to high school students since its inception.”

What is really clear from that part of the discussion is that uAspire, thanks in large part to Bob’s work, has done a wonderful job of what I would call “picking a lane”, helping kids and their families navigate the issues around the financial ability to go to college. Then he searched for how to maximize the effectiveness of what uAspire does by choosing to work directly within school systems, rather than as adjuncts to them.

Bob and I still had the big question to discuss, though. It was the title of the blog post in which I discussed Root Cause’s work with uAspire: Are we making the right kind of difference?

I asked Bob if he felt counselors know enough about the students who are counseled as Bob would like, and the possibility that they could be moved in directions that might not be best—such as, most dramatically, even going to college at all. I asked him how uAspire thinks about the kids themselves and the other things going on in their lives and with their families, besides just the issue of college affordability. For example, as I wrote in the previous blog: Is college even right for every kid and family? What if a family isn’t prepared to take on debt? What if the student isn’t adequately prepared to succeed in college?

“We think a lot about the kids,” he explained. “Student centeredness is one of our five organizational values. And we recognize that the young people we work with have all kinds of challenges they are facing. What we offer doesn’t address most of those, and what we offer them might not do much to move the individual needle. That’s why we’ve always chosen to be part of another ecosystem: our approach serves students in school, during the school day, because other things come up, and they will need other resources.”

Bob explained that as much as he’d like to ensure a better pathway to success, there are simply too many things uAspire advisors don’t know about students, or that the systems within which they work don’t even track, that they would need to know to do a better job. “We could provide better help if we had more consistent access to some quantitative and qualitative info about a student: transcript, academic performance, social and emotional ability to connect and navigate, an intended course of study if a student has figured that out, and some family data, too, so we could take a stab at how much a student might have to work while in school.”

That comment reinforced my belief that nonprofits, philanthropy, and government need new measures, as I wrote about recently. Bob went even further, stating that optimally he could choose to work with school systems based on whether they tracked and used the data he would like to have. Of course, like just about every effort in our sector, that’s simply not possible—we often have to choose between going where we might have the greatest chance of success and where the money is. That structural problem in the overall sector will be the subject of a future post.

Perhaps more than anything, my conversation with Bob Giannino reveals the tremendous importance of access to meaningful data. In uAspire’s case, the organization’s ability to go beyond the specific challenge of college affordability and support high school students on a pathway to lifelong success depends on data that would provide a much fuller understanding of students’ lives. That’s what’s needed throughout our sector to ensure that the difference we make is the right kind of difference, the difference that leads to whatever is the next milestone on that lifelong pathway—and beyond.

Just as I’ve done in some of my earlier blog posts, I asked Bob whether he’d like to offer readers a song. Here’s a link to the song he chose: Des’ree singing “You Gotta Be,” in her 1999 remix.

“The lyrics—‘challenge what the future holds’ and ‘ya gotta be bold’ and ‘ya gotta be tough’—have always spoken to me,” Bob said about his choice. “They’re just all so representative of the way I’ve either had to or chosen to live my life and lead in this work.”

We must find common purpose
You Have to Pick a Side
Allyship: Listening, Supporting, Acting